The painful process of trying to buy a home through a short sale has finally taught me something! I retract that - I have actually learned a lot over the past four months. I've learned to sympathize with my clients. I've learned to accept help (still working on learning to ask for it). I've learned to worry less, I think.

But today, after a few long days of intense decluttering and preparation for downsizing, as I ate what little food was left in my fridge, I realized something I never have felt so vividly before: What I really need is pretty minimal.

I had mentally prepared for downsizing from 1700 sqft with a two car garage to 1200 sqft with a 1+ car garage. When that move was continually delayed I had to downsize even more, to less than 1000 sqft with no garage. I realized I'd have to only take what I really need and the rest would go to storage.

As I began to sort through my boxes I was amazed at how little I classified as a necessity: clothes, some linens, toiletries, food, some toys for the kids, and not a lot more. So why have I been wasting so much energy on the other items that I owned?

And why, even though I didn't need them, was I still holding on to them? I found myself answering that question a myriad of ways. Like, "I already have it; I might as well keep it." Or, "It's valuable even though I don't need it." The answer that I thought the most, "Sentimental value." It was like I thought throwing away an old doll would insult my parents or discredit my childhood.

Who am I fooling? This stuff is meaningless. It drains me of my energy and resources to retain it. And worst of all, it tells me that which I value is here on earth instead of where it should be. I have been so greatly distracted by this world.

Where there is no vision, the people perish: but he that keepeth the law, happy is he. (Proverbs 29:18, KJV) 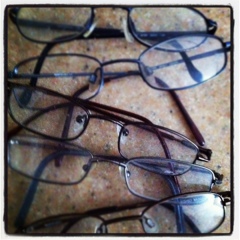 When my oldest son was 4, we had a strange experience. Almost overnight one of his eyes began to drift in. Immediately we recognized it as a "lazy eye" and took him for an eye exam. The doctor confirmed what we already knew: Jacob didn't just need glasses, he really needed glasses. For five years he we faithfully took him to his annual check ups, even had him get vision therapy (think speech therapy for your eyes) to try to give him the ability to see properly. It was at this particular check up that the doctor surprised me.

The doctor commented that Jacob's prescription was stronger than last year's which concerned me. I had gotten the distinct impression the previous year that his eyes were getting better. When I asked the doctor he clarified, "No, we've just been working on getting his eyes to the same prescription - that is what we celebrated last year."

When I read the passage in Proverbs, I often think that lack of vision is not as serious of an issue as it really is. What I forget is that recovering from lacking vision can be a terribly long process. As in my son's case, it took four years for his eye to give up and it took that same amount of time to bring it back to the level it was supposed to be at.

In our spiritual lives this can be terribly frustrating. We get distracted from the vision God has given us, and then wonder why our life seems stagnate. We wonder why we've wandered away and not gained any ground. We think God has abandoned us or is making us suffer when really we are just living out the consequences of our own lack of vision.

"...Suppose a woman has ten silver coins and loses one. Doesn’t she light a lamp, sweep the house and search carefully until she finds it? And when she finds it, she calls her friends and neighbors together and says, ‘Rejoice with me; I have found my lost coin.’ In the same way, I tell you, there is rejoicing in the presence of the angels of God over one sinner who repents" (Luke 15:8-10, NIV).

The Parable of the Lost Coin, as it is known, has never been very powerful to me. Perhaps it is because I have been fortunate enough in my life to have never had so little money that losing one coin would be detrimental. Oh of course we've been low on money before, but never in a place where it meant life or death. I've never had to chose between feeding my kids and paying my rent. Of course, I also live in the credit card generation, but I digress. I've also lost important things, as we all have. But like I said, for some reason this scripture never resounded with me.

Until a week ago on a Sunday afternoon. After church, my husbands and two sons headed to Disneyland for some family bonding. They joy of being an annual passholder is that you can go for just a few hours and then go home. So this ritual is nothing new or unusual to my kids, nor is our effort to collect smashed pennies - you know, the ones you pay 51 cents for. On this particular trip both Jacob and Josiah had picked out a Pirates of the Caribbean penny.

As we walked out of the park, Josiah, happily enjoying his penny, tossed it up in the air. It was one of those slow motion moments - as it flew threw the air we knew exactly where it was headed - and we all saw it land just off the concrete walkway in the bushes next to us. The horror of knowing that error might have resulted in immediately struck him as Josiah looked for it, but he was not able to see it because the bush was quite thick. Then it was my husband's turn, again looking for penny right where we had seen it land, was not able to find it. He suggested we just leave it, after all, it really wasn't worth much. Or was it?

To us, it was just a penny. To Josiah it was his deepest joy. He had visions of playing with it for the drive home and falling asleep with it in his hand, maybe even taking it to Grandma's house to show her. He had selected the design. He had smashed it by himself in the machine. It was his, and it would be a source of pride and pleasure for years to come.

But not now, it was lost forever. We started to walk away, and I could see his heart breaking. And that's when it happened. I found myself on hands and knees digging under a very prickly bush, removing debris, determined to find where it was. And just a few moments later, alas, there it was.

We all rejoiced, but none so great as Josiah. For it was his penny. It was once loss, but was now found.

Thank you God, that you too loved me like that penny: You saw the worth in me when I was really nothing of great importance, You lowered yourself and came in search of me when I was loss, and You dug me out of the dirt and cleaned me off. 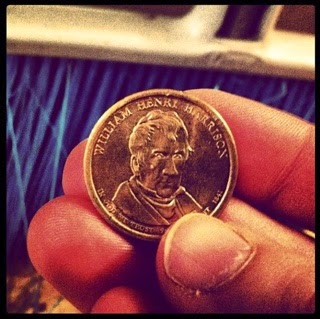