The Story of the Toy Soldier 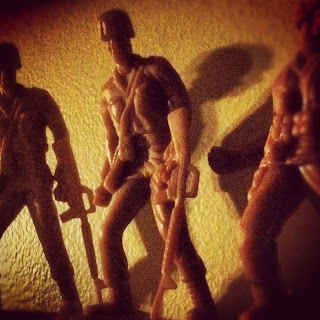 As the kids played at our church Christmas party on Saturday they received prizes including these toy soldiers. At the end of the night Jacob (10) realized he had lost his. We looked for it but could not find it.  My sister found one, but noticing it was not the same - this new one had a grenade instead of a rifle - he did not want it.  He wanted the one that he had been given.  He was heartbroken.

The next day, Sunday, when we arrived at church one little girl, Emily (6), ran up to Jacob and pulled a toy soldier out of her purse.

"Wow, Jacob, tell Emily thank you for finding your toy soldier," I prompted him.  Emily said nothing and happily ran off.

Later, Emily's grandma set the record straight: that was not actually Jacob's toy soldier. It was her toy, but seeing how much more her friend wanted it, she freely gave it to him. Thank you God for this model of generosity!

But wait, the story gets better!  Sunday evening when my two sons were playing with their toy soldiers I saw they had three.  So, I asked my son where the extra had come from.  He told me that Emily's brother (also named Jacob) had given his to my son Jacob as well.

Command them to do good, to be rich in good deeds, and to be generous and willing to share. In this way they will lay up treasure for themselves as a firm foundation for the coming age, so that they may take hold of the life that is truly life. (1 Timothy 6:18-19, NIV)
at December 19, 2012 No comments: