Jesus Messed Me Up 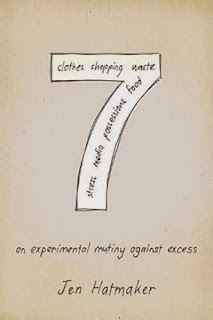 I walked into work at 8:37 (23 minutes early, woo hoo!) praying the prayer, "Jesus, mess me up."  I've been reading Jen Hatmaker's book 7 in which she takes 7 months to focus on 7 areas of her life.  She is big on social justice - which admittedly I'm less interested in than I probably should be because it always feels so political - and through this process of 7-ing her life she has questioned her priorities, her motives, and her faith.

In the chapter she discusses the month she spent giving away her possessions, she makes the statement how her husband sent Shane Claiborne (an activist/author/preacher) "an email through dubious channels basically telling him The Irresistible Revolution was messing his wife up."  She goes into a beautiful narrative of the Easter service in which Shane asks for those in attendance to leave their shoes at the altar to be give to the local homeless population.  In similar sentiment to Jen's observation, I must candidly admit we've done a lot of unique things at Easter services (and through the year, too), but never once have we had a service where we took the clothe off our back, err feet, as a tangible sacrifice to the will of God.  And so with this in mind I prayed that prayer: Jesus, mess me up.  Make Your will, my will.

And then it began, the work day.  I love my job and the fascinating information I learn about people (hey, you'd learn a lot about people too if you reviewed their tax returns and bank statements).  But today was different, I had the task of reading a lawsuit against a Home Owner's Association.  Oh joy!  I've read these before, dozens of time.  So and so did such and such... things like, Sally Smith in Unit 3B won't mow her grass and now my unit looks atrocious sitting next to hers.  Or there was one that went something like Bob and Linda, located in the unit directly above mine, removed the carpet from their unit and now the noise in my home is unbearable.  I'm not joking, people sue over these things!

Today's reading was something entirely different.  "David" and "Michael" are a homosexual couple who were physically and verbally assaulted at an owner's meeting.  In great length, the verbal insults were detailed (none of which I would feel comfortable writing here) and the step by step physical assault played out.  Oh, and did I mention the private security company not only was present, they held back those who were trying to help?

This messed me up.

Agree with a lifestyle or not, no one should act this way.  I began to think about all the types of assaults that occur regularly and quietly get swept under the rug.  And then worse, how often have I been the one to say something against another undeserving of such judgement?  Sure, I've never physically kicked a person that I disagree with, but I may have verbally kicked them.  What would I have done if I had been in that meeting?  Would I have been a peacemaker or would I have quietly slipped out?  If I had to fathom a guess, I'd be embarrassed to admit which is more likely.

Jesus, continue to mess me up.  Open my eyes to the truth around me.  Don't let me closed minded to opportunities to serve You by serving my neighbor.

But who is my neighbor? Someone once asked Jesus that:


But he wanted to justify himself, so he asked Jesus, “And who is my neighbor?"

In reply Jesus said: “A man was going down from Jerusalem to Jericho, when he was attacked by robbers. They stripped him of his clothes, beat him and went away, leaving him half dead.  A priest happened to be going down the same road, and when he saw the man, he passed by on the other side. So too, a Levite, when he came to the place and saw him, passed by on the other side.  But a Samaritan, as he traveled, came where the man was; and when he saw him, he took pity on him.  He went to him and bandaged his wounds, pouring on oil and wine. Then he put the man on his own donkey, brought him to an inn and took care of him.  The next day he took out two denarii and gave them to the innkeeper. ‘Look after him,’ he said, ‘and when I return, I will reimburse you for any extra expense you may have.’

“Which of these three do you think was a neighbor to the man who fell into the hands of robbers?”

The expert in the law replied, “The one who had mercy on him.”