Who Stole my KitKats and Faith in Humanity? 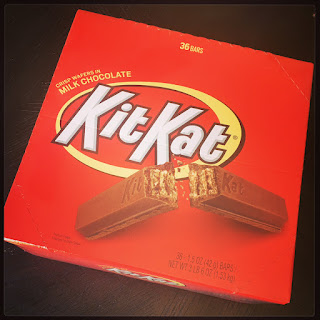 I sometimes hear people refer to the Ten Commandments as a basic law of morality.  To this I wonder: have you ever met a person before?  I mean, seriously, people are terrible.  No, not always, of course.  Sometimes we do these really awesome things, but then other times... yikes!
Yet, we retain this idea that people are basically good. For example, most people would say it is wrong to steal. Most would even say that they don't steal because it is wrong. Unfortunately, as I learned again this week, one's ideals do not always match their actions. People steal.
I've had things stolen from me plenty of times. When I was a young girl, someone stole my Glo Worm. I forgot it somewhere and went back for it that evening, but it was already gone. In 2002 someone stole my car. My husband and I were out of town for a work conference, and one evening my husband somehow forgot the keys in our car with the windows down. This is quite uncharacteristic for him, and in the middle of the night he realized his error.  He went out to to get his keys, but the car was already gone. A few years ago I watched an elderly gentleman reach into an open drawer, remove a pair of scissors, and walk away with them. Most recently? Last week someone stole my KitKats.

Are they easily replaced? Sure.

Was it a valuable lesson? I guess so.

Do I feel personally violated? Definitely.

I guess my first mistake was assuming that because my church has been closed for six months that people do not enter the building. The doors get left open as we move from building to building in the course of a day's work, and, of course, people have keys. I suppose I got too comfortable, and I made a bad decision.

I want to give people the benefit of the doubt. My husband rolls his eyes when I rationalize: maybe they thought it belonged to them, maybe they thought it was abandoned, maybe they thought it was going to waste. In this situation, there is no way to rationalize someone taking these candy bars.  That's what makes it so frustrating. This wasn't Jean Valjean stealing bread to feed his family. These were KitKat bars. Gimme a break! (See what I did there?) To me, experiences like this prove the Ten Commandments are such a lofty code of conduct.
Writing to believers who were already familiar with the Ten Commandments, the New Testament author James expounds:

So, in the midst of my feelings of hurt, anger, and frustration, I must remember that I too have broken God's law.  I am no better than the person sitting somewhere 72 KitKats richer.
at October 19, 2020