My daily devotional reminded me today that, "We have a God who specializes in impossibilities. His power is greater than our problems, our difficulties, our crises, our emergencies, our reverses" (Mendell Taylor's Every Day with the Psalms).

Today feels like a day of impossibility, and so I must proclaim that I need God.
Today may be a day of impossibility for you, so I must write about it.
When I was a child, I loved riddles.  We'd ask question like this paradox: Can God make a rock so big that He can't move it? It turns out plenty of people are still discussing this question and others like it. The question doesn't really have anything to do with God; He just happens to be the subject.  Instead, we seem to love thinking about what is possible and what is impossible.  As if we know. 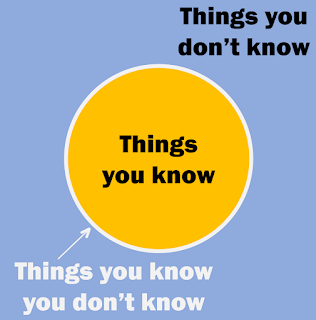 A friend once explained knowledge to me this way: Imagine a small circle.  The area (the interior of the circle) represents everything you know. Everything you don't know is outside the circle.  The circumference (the line making the "outside" of the circle) represents the meeting of what you know and what you don't know. It is what you know you don't know, the tip of the iceberg so to speak.  If you were to next draw a large circle, the area (your knowledge) would increase significantly but so would the circumference (what you know you don't know).  Therefore, the more you know, the more you know you don't know. There are a lot of things I don't know.  I hope that means that I am growing in knowledge.
Today is the second week of my second year of college.  It's the second time in my life that I've been able to say that. Almost two decades ago I attended two years of university.  My life experiences have taught me a few things since then, but there is really only one fundamental difference this time: when I don't know something, I want to know. It's why my Goodreads' Read list includes books I wouldn't have picked up before. I actually read books on the subject I am studying that aren't assigned by my teacher.  My eighteen year old self would wonder who I've become.
I learned to read unassigned books during the years I wasn't in college.  It's how I compensated for what I felt was a failure. I thought it was impossible to correct the mistakes I had made.  I just didn't get it.
So, what's impossible today? I'd rather not talk about it, if you'll give me that grace.  But, I think of the words that I have struggled to believe for years:

I can do all things through Him who strengthens me. (Philippians 4:13, NASB)

I hear this verse thrown around like it's a lotto ticket. Well, that's a terrible simile because I would never throw around a lotto ticket, at least not a winning one. I would hold it close and guard it until I could cash it in. No, this verse is the battle cry of those who preach the prosperity gospel. Do you think a Ferrari would further your ministry? Believe in Him to give you a Ferrari. The truth is, I don't want a Ferrari. I told my husband he could never buy me a car with more than 6 cylinders, or else he'd have to get a second job to pay for all the speeding tickets.

This verse is not a name-it-and-claim-it verse.  It's a testament to the power of Christ.  The verse literally says: For each thing, I have the strength of the one strengthening me.  However, we read translations, not transliterations, and so we end up with the words we are more familiar with.  The difference here is slight, but I believe the transliteration makes the verse harder to pluck out in singularity.  Alone, it begs the reader to ask: what things?  The answer is in verse 12.  Poverty. Wealth. Hunger. Contentment. Abundance. Lack.  In that context, it's hard to think of this verse as access to anything you want.  The verse is not about the ability to have anything as much as it's about the ability to have faith. So, today, on a day that seems impossible, I can have faith because Christ is strengthening me.
at August 31, 2020

Email ThisBlogThis!Share to TwitterShare to FacebookShare to Pinterest
Labels: Philippians