It's a funny thought to consider that all traditions were once a new idea.

One tradition most Americans (and many people around the world) connect with is "the ball" dropping on New Years Eve in New York. While we confidently look for this event each year on the television, there was a time just over a hundred years ago when it was nothing more than an idea.

And what about our religious traditions? On Sunday night I had a discussion with a pastor in my denomination who told me we are expected to have communion seven times each year. While some local churches surely observe communion less than that, there are other local churches - like the one at which the aforementioned pastor works at - whose tradition is to participate in communion every Sunday. Same denomination, different implementations of our tradition.

And while on the topic of communion, this too was once a new idea. It was implemented by Christ at the Last Supper when, gathered together with His closest friends, the Lord broke bread and changed an old tradition (Passover) to a new one (Communion or Eucherist, depending on your tradition - see where I'm going).

And so it was last night at the church I attend when I gathered together for a planning meeting. This meeting happen to fall on Epiphany - the 12th day after Christmas historically observed as the date when the Wise Men found the Christ Child. Or, as it's known in Spanish speaking cultures, Dia de Reyes. This is not a day we normally celebrate at our church, but, thanks to my good friend who does celebrate it and told me about the tradition, I stopped at my local bakery and purchased a Rosca on my way to the meeting. 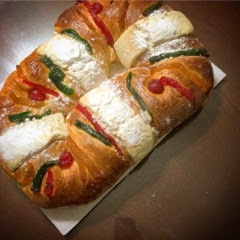 For those of you not familiar with this holiday, according to Wikipedia, "The tradition of placing a trinket (a figurine of the Christ child) in the cake is very old. The baby Jesus hidden in the bread represents the flight of the Holy Family, fleeing from King Herod's Massacre of the Innocents. Whoever finds the baby Jesus figurine is blessed and must take the figurine to the nearest church on February 2."

Will this event become a tradition? Only time will tell. In the meantime, what are some of your traditions?
"When the wise men saw the star, they were filled with joy. They came to the house where the child was and saw him with his mother, Mary, and they bowed down and worshiped him. They opened their gifts and gave him treasures of gold, frankincense, and myrrh. But God warned the wise men in a dream not to go back to Herod, so they returned to their own country by a different way" (Matthew 2:10-12).
at January 07, 2015

Email ThisBlogThis!Share to TwitterShare to FacebookShare to Pinterest
Labels: Matthew