Communion and the Coronavirus

Becoming an online student has come with a learning curve for both my children and me. Certain classes have been very straightforward with students checking assignments daily on Google Classrooms and then following the prompts. Other classes have left me wondering how the work will be finished. My older son is enrolled in a ceramics class. For obvious reasons, he won't be making projects at home. (My fire insurance carrier is thankful for that!) Instead, he was assigned to share the instructions for a "meaningful recipe," bake it, and then take a magazine-style photo of the food in the bowl he made last semester.

For every family, what has meaning is a little different. I once heard Ina Garten say that she makes a roast chicken every Friday for her husband.  Think about all the special moments that have been shared between them while eating chicken, especially considering she's been married more than 50 years! I recently heard Jeff Mauro tell a story about having a late night bowl of cereal with his son.  I remember thinking that when his son grows up he will likely think of his dad every time he eats cereal. Needless to say, I couldn't wait to hear what held a special place in my son't heart.

After some thought, he chose our Breakfast Cookies. Look at these beauties:

I know that at some point I saw a recipe that inspired these cookies, but I've been making them so long that I don't know where.  Because they are so simple, I have been making them without a written recipe. Before you ask, I'm not one of those people that memorizes all her recipes. There is only one other recipe that I have memorized.

There is another special meal we often share. I sometimes forget this tradition started at a dinner table because I usually call it by it's "church name." Communion, or Eucharist depending on one's tradition, started when Jesus and His disciples shared a traditional Jewish meal: Passover. This is what we are told in the Gospel of Luke:


When the hour came, Jesus and his apostles reclined at the table. And he said to them, “I have eagerly desired to eat this Passover with you before I suffer. For I tell you, I will not eat it again until it finds fulfillment in the kingdom of God.” After taking the cup, he gave thanks and said, “Take this and divide it among you. For I tell you I will not drink again from the fruit of the vine until the kingdom of God comes. And he took bread, gave thanks and broke it, and gave it to them, saying, “This is my body given for you; do this in remembrance of me.” In the same way, after the supper he took the cup, saying, “This cup is the new covenant in my blood, which is poured out for you." (Luke 22:14-20, NIV)

I have taken communion more times than I can remember, but I do remember the ones that had significant meaning.

I first took communion when I was young, maybe four or five. I remember my mom explaining to me what it meant - both the symbolism in the bread and juice and that it should only be taken by those who have faith in Christ. I understood, at least as much as a child of that age can, and so I ate and drank. I consider that my first confession of faith.

I last took communion two days ago. It didn't look like the traditional bread and juice, but I believe it was even more special for that reason. I should tell you that we don't often have saltines or juice in the house, but I had picked up cranberry juice because my husband has been craving it recently and I picked up the crackers for no particular reason. No particular reason except, as I now believe, to have the elements for communion. When we sat down to watch the broadcast of our Sunday morning service, I had no idea it would include a time of communion. However, because God provides what we need, I had it all. 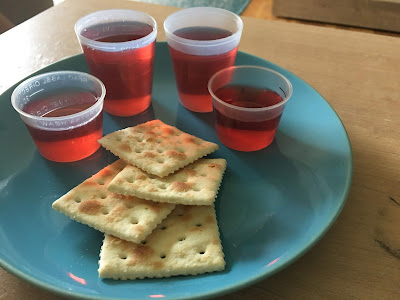